Hi again! Here's the first chapter of a series of recaps about this journey, the ins and outs of the process of creating this point-and-click adventure game, as a solo developer. Since The Campsite is already on the final stage of development, I expect this to be more of a retrospective than a diary, where I’ll try to summarize the highlights for each stage of development.

Having said that, let’s start with the subject that I've been working on most recently: Character Animations.

As I was pointing out in the previous post, it has taken quite some time to create all the animations for the characters, and this is a very short game. So, definitely a thing to have in mind when writing the story and deciding on the number of characters appearing in the game.

I knew I would blame myself at some point for having three main characters, but I guess the key point here is to figure out whether a character is needed to convey the story or not. And in that sense, I needed them all. So no regrets on that, as it was worth the effort.

Without the three main characters, it would have been a different story.

One of the advantages I found by having created a lo-fi prototype of the full game before (the one that you can play here) is that I knew to a great extent what the characters would do and wouldn't do during the whole game. Since most of the story, puzzles and characters were already in place, it was easier to figure out the total number of animations I would need to create, saving plenty of time and making it easier to plan.

One of the reasons I’m working on this, is to learn -from A to Z- the process of creating a point-and-click adventure game. Therefore, I always save some time at the beginning of each stage to document myself a bit and experiment with the craft.

But how we learn things might differ from one another -as we all have different abilities, preferences, and every situation might require different approaches as well. But in this case, fastening the learning curve worked very well for me, as I wanted to gain experience as fast as possible, to push myself a bit.

So it implies starting with the most difficult part, which can be a bit frustrating, as odds are that plenty of stuff will go directly to the bin. But it wasn't that hard after all.

I started then with the character with the longest list of animations, as it covered all the basic set and a good bunch of special case animations. This helped me to set the foundations for the rest of the characters, defining the style and the technique that I would feel comfortable working with. Once I was done with it, working with the rest was still demanding, but it was much faster and straightforward, almost mechanical. 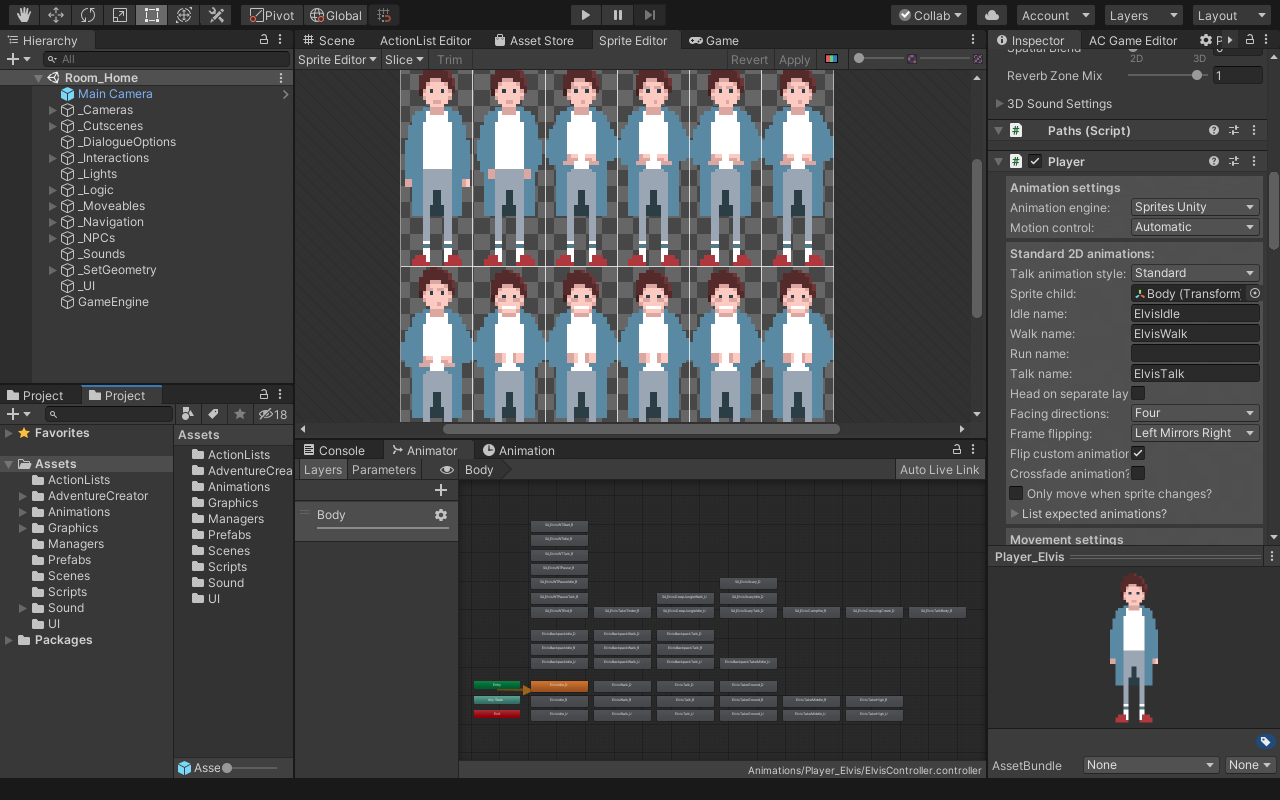 Once finished with the first character, things started to run smoothly.

Before starting, one of the decisions I had to take -and which would have a big impact on the amount of work to do- was deciding on the number of directions that the characters would face. 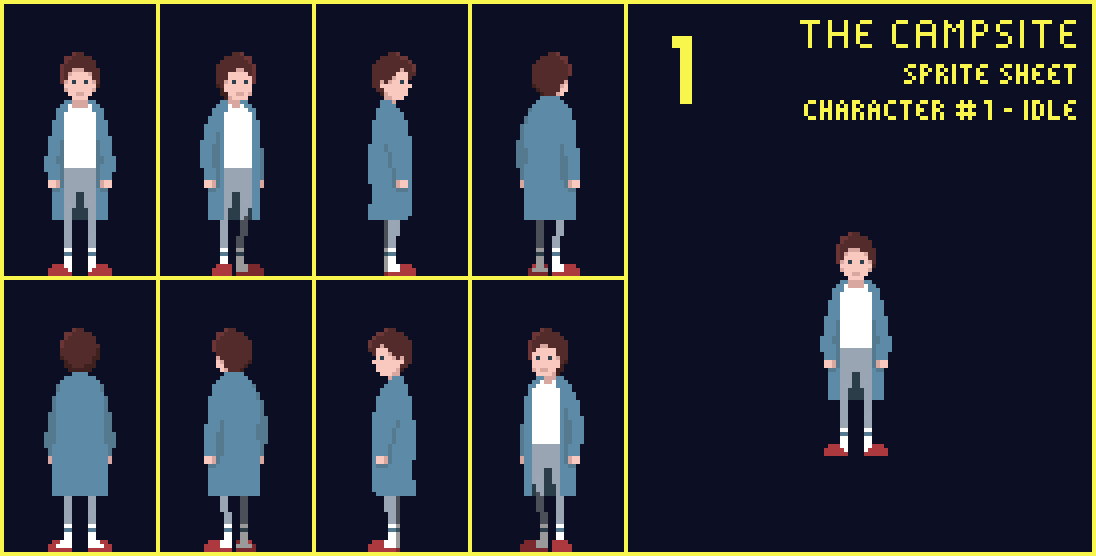 I was about to complete the full set for the first character, when I changed my mind. It is true that having animations for all directions feels more natural -the player will have to move in the eight directions anyway- but it felt like it was losing a bit of the retro effect I was looking for, which was much clear with four directions only. Therefore, I decided to get rid of most of the diagonal ones, and stand for a more retro style.

So, the main character has no more than 30 animations in total. This is between the basic set, some variants of it, and the special case animations. The basic set is composed by four groups, which covers all the animations needed for the Idle, Walk, Talk and Take states, including four directions for each (Up, Down, Left and Right), and three additional variants (Down, Middle, and Up) in the case of Take. I also had to create some variants of it for the scenes that the player is carrying the backpack.

Therefore, by having eight directions instead of four, that would have meant doubling the amount of animations to do.

And finally, the special case animations include anything that is not part of the basic set, such as a character gesturing while talking, specific face expressions, and any other animation needed for a specific cutscene (e.g. The scene with the cockatoo).

That’s all in regards Character Animations. Or at least, this is what I found more interesting or relevant to share. Otherwise, let me know in the comments section below!

ℹ️ About this series

Some of the topics I will be covering here are related to the design phase. From the first steps, starting with a "white canvas", writing the plot or designing the puzzles, to the creation of the prototype that I published here on itch.io, which I've been using to test the game and the overall concept. In other chapters, I will put the focus on the production stage -in which I'm immersed right now- tackling topics such as the art creation, music composition, sound FX or animations.

This won't follow a chronological order, as I will be deciding what to write about on the fly. After all, I don't even know how long this series is going to be, so let's see how it evolves!

Looking great!!!! Can't wait to play it again but with all the final art and animations! <3